Is this a crypto fantasy or will it be the fiat reality?

Is it time to start taking Bitcoin seriously as a new global currency?

A few years ago I remember chatting to a friend who was threatening to throw a few quid into bitcoin as a fun speculation. That was early 2014 when there was a lot of news coverage about this new phenomenon of block chains and cryptocurrencies. I told him that he must have too much cash too burn if he was willing to throw his money away on such an obvious bubble that was going to pop at any time. The price then was around $500. Yesterday Bitcoin smashed through the $1,800 mark for the first time. Below is a graph of the market price. 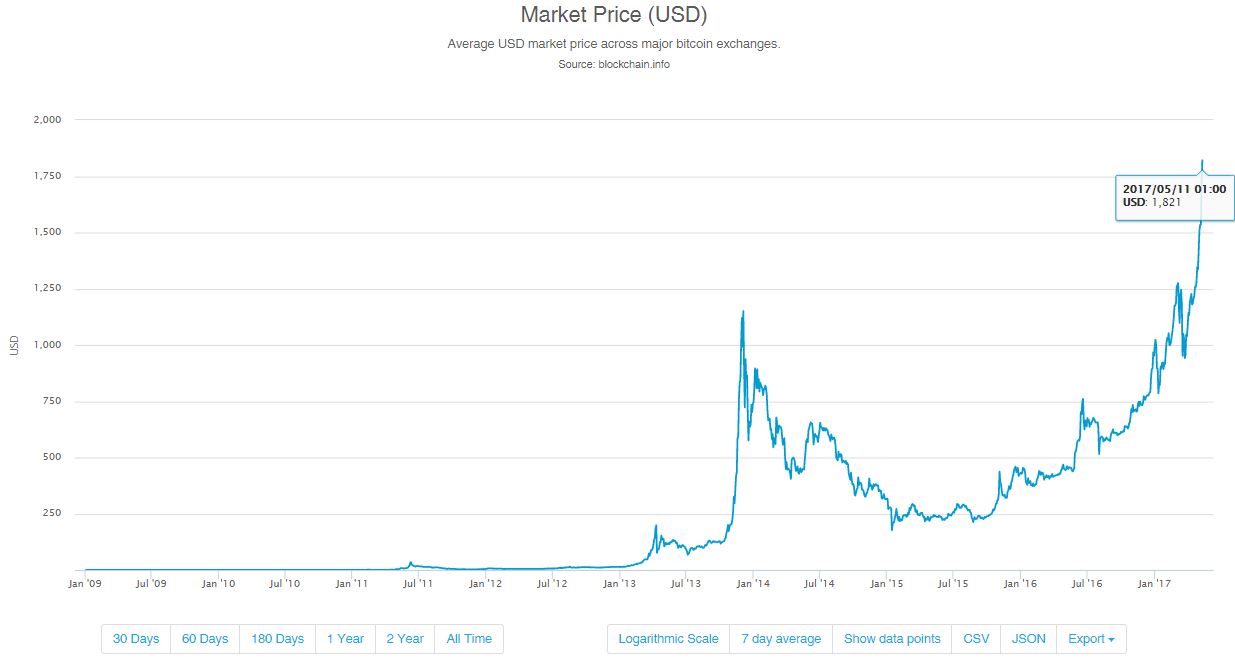 Warning: Everything that follows is purely for informative and educational purposes, this is not in any way an encouragement to go out and buy Bitcoin. In fact I’d really emphasise that the returns of the last year are unsustainable and very reminiscent of the dotcom bubble where people had a sense that this was the next big thing and threw money into terrible ideas. No one should put more money into this stuff than they can afford to lose in its entirety.

And if it does completely blow up in a few week’s time you can say that you heard it here first.

Forget about speculating, is it actually useful?

A Layman’s Guide to Cryptocurrencies:

One thing is clear I don’t know much about anything when it comes to Bitcoin so I decided that I would talk to the top Irish expert that deals with cryptocurrencies. Working in high finance by day you will find him trawling crypto related sub-reddit forums and submitting letters to the SEC by night. Depending on the day that you ask him and the price of the coin he is a crypto advocate, critic, commentator and speculator. Rodger Delehanty CFA has been kind enough to provide Digital Chief with slides of a recent presentation he gave on the subject and I have picked out some highlights that shed a little light on the subject. You can View All slides here. 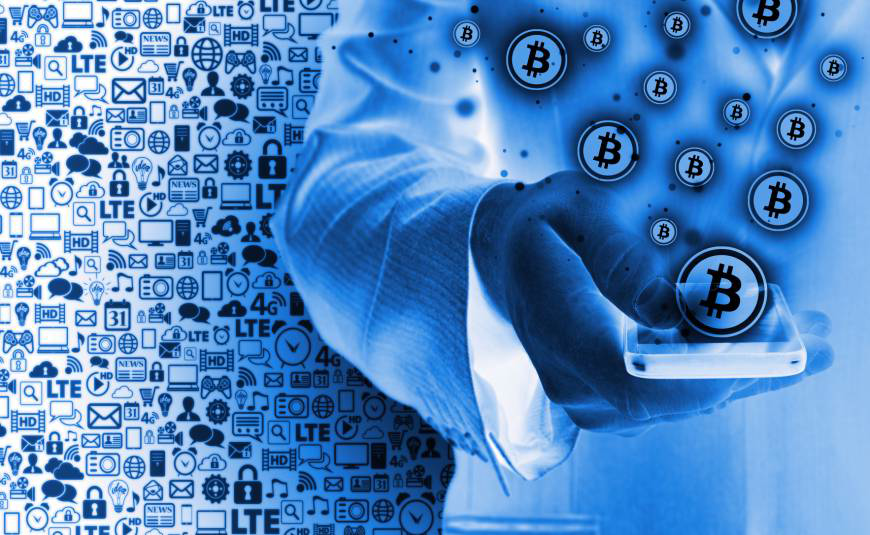 The Basics of Bitcoin

Most simply it can be thought of as programmable cash. Ideally, bitcoin will be to money as the internet is to information.

• Open Source — Anyone can view all the underlying code or propose tweaks.
• Decentralised — No one is in charge. No central bank. Very difficult/impossible to censor.
• Peer to Peer — A la cash. No intermediaries as with visa/mastercard.
• Permissionless — Anyone can build an app on top of the network. Anyone or anything can have a wallet — be it someone in the 3rd world with no id, a 13 yr old, a self-driving / owning car or a terrorist group. The network is dumb and it does not discriminate.
• Trustless — Every node on the network can independently verify all transactions.
• Immutable — Once bitcoins are transferred they cannot be charged back. Once something is posted in the chain it cannot then be edited later as everything is sequentially dependent.
• Public — Everyone can see the details of all transactions on the blockchain.

What will Bitcoin be when it grows up?

Bitcoin is and has been different things to different people:

Gold 2.0 — For 21st century goldbugs and libertarians. To them BTC is a crypto-asset that replicates all the positives of gold, (limited supply, independent of central banks, fixed supply / known monetary inflation etc) without the negative of being very hard / expensive to store and transport.

Banking as an app and providing financial services to the unbanked where the only pre-requisite is a mobile phone.

Speculation Vehicle — BTC has had very volatile returns in last number of years, largely very positive. In many ways the blockchain/crypto space is like another dot-com bubble. People feel that ‘this is the future, I want a piece’ but don’t understand the fundamentals. All crypto-currency mkt caps ~ 12 bln $.

P.s. I would still firmly believe that the market price is crazy at the moment. However I am fairly bullish on the idea that cryptocurrencies in some guise or another are definitely here to stay.

p.p.s. If you are interested to learn more, this post is surprisingly easy to read and seems to make a lot of sense: reddit:BTC the circle of competence

Digital Chief: helping your digital dreams become a reality since 2016!

If all that talk of Bitcoin has left you feeling a bit frazzled, here is a Friday feel good video guaranteed to put a smile on your face. If you have not seen it before, it is well worth taking a few minutes out of your day to have a look.

This website uses cookies to improve your experience while you navigate through the website. Out of these, the cookies that are categorized as necessary are stored on your browser as they are essential for the working of basic functionalities of the website. We also use third-party cookies that help us analyze and understand how you use this website. These cookies will be stored in your browser only with your consent. You also have the option to opt-out of these cookies. But opting out of some of these cookies may affect your browsing experience.
Necessary Always Enabled
Necessary cookies are absolutely essential for the website to function properly. This category only includes cookies that ensures basic functionalities and security features of the website. These cookies do not store any personal information.
Non-necessary
Any cookies that may not be particularly necessary for the website to function and is used specifically to collect user personal data via analytics, ads, other embedded contents are termed as non-necessary cookies. It is mandatory to procure user consent prior to running these cookies on your website.
SAVE & ACCEPT
Website Development
testpop

Test pop check out to do it etc,